Almost 5 and a half Wooded Acres near Lake

Here's your chance to own wooded acreage that has abundant wildlife and is close to Lake Petenwell! The Yellow River is also nearby! Choose your camping or building site in this beautiful forest and surround yourself with the majestic pine trees on the property. Reside or vacation in this outdoor recreational area. ATV or snowmobile from this land to the Necedah Wildlife area! Hurry, Don't wait to live your dream! Priced BELOW assessed value. There is more neighboring land available for sale too, so bring a friend.

Castle Rock Lake was manmade and built back in the late 1940’s by Wisconsin River and Power Company by constructing a hydro-electric dam called the Castle Rock Dam.  With an impoundment of 13,000+ acres of water, it is Wisconsin’s 4th largest body of water.  Castle Rock Lake is one of Central WI. most popular attractions and has been for many years.  Today it is used for boating, fishing and swimming with something going on nearly all the time.

Buckhorn State Park is located in Germantown Township of Juneau County, Central Wisconsin on both Castle Rock Lake and the Yellow River.  The park consists of about 6,000 acres of outdoor haven offering a little bit for everyone including the local Wisconsin Wildlife.  There’s lot of outdoor photography opportunities and nature experiences to have if its camping, hiking, canoeing, kayaking, hunting, trapping, boating, swimming, fishing, backpacking, picnicking or just sitting back and watching the natural world go by.  The state park includes miles of frontage and several boat launches offering tons of water activities on the Yellow River and Castle Rock Lake part of the Wisconsin Flowage system.  Castle Rock is WI’s 4th largest inland body of water and is a manmade lake controlled by a hydro dam (creating hydroelectricity) to the South where the water turns back into the Wisconsin River.

Cutler Township is located in Juneau County, Central Wisconsin just East of Monroe County, North of Camp Douglas and West from the Village of Necedah. This township is between Wyeville and Necedah where the Union Pacific railroad connects the two small towns. This area is mostly wooded with lots of wetlands. There is a lot of land open to the public via Central Wisconsin Conservation Area, Meadow Valley State Wildlife Area, Necedah National Wildlife Area and Juneau County public lands. You can find some water to fish in many places including: Eagle’s Nest Flowage, Little Yellow River, Lemonweir River, several creeks and named and unnamed ditches. State Highway 21 runs East and West through the whole Town of Cutler. Other main roads include County Road M & H. Most but not all of Juneau County Roads are now open to ATVing, so check local regulations. ATV Maps 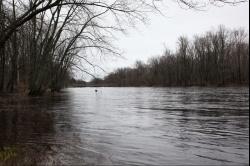